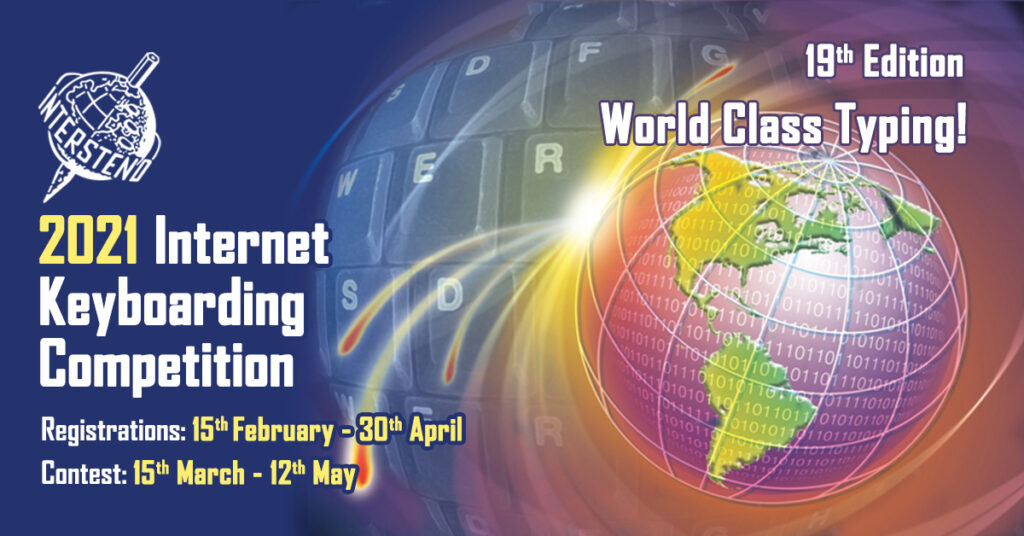 This competition is the most important international championship.

It is open to students from public, private schools or associations and for seniors who register through their Intersteno National group.

The certificate received by successful participants is an important asset for professional life.

The goals are to foster proficiency in the use of the keyboard and to engage young people in fair and healthy competition with their peers all over the world. Each competitor can compare his results with those of other participants of the same age category not only in his native language, but also in foreign languages.

Thanks to this competition, schools are able to show their presence on the Web at the international level about a useful ability at any learning level. It is clear that a professional approach in keyboarding is a basic competence useful in any type of school and helps to fulfill the growing demand for producing documents and communicating with the aid of computers and tablets.

The contest consists of ten-minutes of text entry, using special software available on the website www.intersteno.org (in Taki and ZAV formats).

Grading in accuracy and speed are done according to internationally agreed-upon standards based on long experience and intensive investigations.

During the opening ceremony of the 52nd congress in Cagliari (July 2019), Jaroslav Zaviačič and Helena Zaviačičová awarded 8 winners of the 2019 Internet contest. Of course they were present to participate in the World Championship! Most of them were successful and classified in the first places in their age category.

BASIC RULES OF THE COMPETITION

It is open to students from public, private schools or associations, and for seniors (21 years and over) who register through their Intersteno National group.

Results are ranked according to the following age categories:

To qualify competitors must perform within the following limits:

The fee must be sent before 14th May 2021. Please contact the Intersteno representative in your Country or, if there is no representative, please send your money directly to:
INTERSTENO Bank Account
Intersteno, Kapellestraat 124, BE-8020 Oostkamp, Belgium
IBAN: BE53-0682-3189-0853
BIC: GKCCBEBB
To non-European countries we suggest to transfer payments using: Paypal.

Read more for all the Rules of the Intersteno Internet Contests

It is attended every year by more than 1500 participants all over the world.