The bet at the worldwide championships of Intersteno

is to succeed in preparing, within the shortest times, texts which have to be perfect in any aspect. These texts can be produced following a fast dictation at progressive speed, or copying or editing from a basic text, as well as integrating data, images and texts coming from different sources.

At each congress, results are improving and they are the combined effect of perseverance, experience, technology and didactic improvements.

To participate in a world championship is an honor, fulfilling a long formative run in which personal and technical abilities play an important role.

The technical results can be compared to those reached by sportsmen at the Olympic games. Also in this case we may simply applaud!

As in the Olympiads, each competitor has a historical background, based on the watchful presence of trainers who in many ways have favored and motivated him to take part in a great event which could seem to be only a dream. 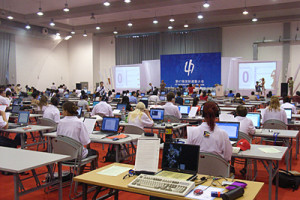 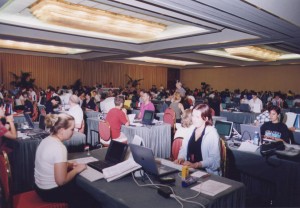 The big halls for keyboarding competition in Beijing 2009 and Roma 2003.

The competitions follow two parallel streams: to take down a text read at an increasing speed or to enter texts and data processed with a computer. In either cases speed and accuracy are the factors of the success.

The traditional tools (pen, paper, typewriter) are now coupled or replaced by computers, traditional or electronic stenotype machines, speech recognition softwares. These technical evolutions had to be considered in the rules of competition, which are constantly up-dated.

Here is a synthesis of the actual formulas of competition, whose rules you can consult in the special menu on the left of this page. These rules had been once again updated during the last meeting of the Council. If you want to take part to our next championships, we beg you to consult the rules. Further information can be asked by email to our jury: jury@intersteno.org.

Take and transcript a five-minute dictation at progressive speed.

The competitor chooses the text to transcribe among three consecutive five-minute dictations given at speeds increased each minute. The initial and final speeds of each dictation are related to the language of the competitors, according to a comparison table set up by the Intersteno Council. At least the first three minutes of dictation must be transcribed successfully. Transcription will be handed out on USB-sticks (pen-drive) or with hand transcription by whom uses traditional shorthand.

Every kind of technology can be used (shorthand – stenomachines – computer keyboarding – voice recognition). Competitors using speech recognition must compulsory use stenomask or silencer.

One classification list for each technology, but only 1 world champion, the one reaching the best result.

The contest consists of 30-minute copying of printed text. Computer and stenotype keyboards can be used. Separate classification list is foreseen for competitors, using speech recognition, who must use stenomask or silencer.

Competitors must hand in their work on USB-sticks (pen-drive) provided by the Jury.

Take of an ten-minute dictation using any kind of technology. The transcription is delivered without any correction, at the end of the ten minutes, on a USB-sticks (pen-drive) delivered by the Jury. Transcription is valid if at least the first three minutes taken are successfully transcribed.

Competitors who cannot follow the dictation must stop writing and no correction is allowed. If speech recognition is used, competitor is compelled to use a voice silencer (stenomask).

Competitors receive a text on a USB-stick (pen-drive). They have to make modifications (delete, replace, reorder, insert, emphasize, indent… – see the generic signs here) as shown on a printed sheet. The kinds of corrections will be indicated with international signs used by professionals in text correction. The competitors will enter as many as possible within a time frame of ten minutes.

A 10-minute-long dictation at a moderate but increasing speed of a text that is divided into sections.

This text has a title indicating its main theme, and several section headings indicating the subthemes. These ─ also dictated ─ title and headings are to be transcribed verbatim, while participants summarize in their own words and in complete sentences the content of each dictated section. The number of words of a section summary may not go beyond half the number of its dictated words.

Participants work on the basis of their notes taken either by handwriting, graphic stenography, keyboarding (including the use of tablet computers), chord keyboarding or voice writing. It is not allowed to make an audio recording of the dictation. The transcription time is 60 minutes.

The competitor receives, on a USB-stick (pen-drive), one or several texts in English as well as data and pictures. He will also receive instructions written in his own language. He has to work on these documents (structure and (re)formatting of text, inserting and smart positioning objects, selecting, sorting and merging structured data, automatic numbering, smart use of tables, advanced search replace, …) and so prepare a professional document within 75 minutes.

The competitors will mainly use a word-processing software.

The competition consists in transcribing for 10 minutes a digital recorded dictation in the competitors’ mother tongue, as far and as he can go and as accurate as he can go. Normal keyboard, chord keyboard (like stenotype) or voice recognition in re-speaking mode (it is producing text by speech recognition) may be used. The dictation will last 15 minutes at a constant and for the language in question normal speech speed (about 1000 characters or 300 syllables) making it possible to attain at least the minimum performance standards:

Competitors must hand in their work on USB-sticks (pen-drive) provided by the Jury.

Competitors in the speech capturing competition may also take part in the multilingual competition. This competition involves taking down dictations in at least two foreign languages. These languages will be stated in advance on the registration form. Each dictation lasts three minutes, at the speeds of 120-130-140 syllables respectively for each minute. Languages available: English, French, German, Spanish, Portuguese, Finnish, Swedish, Czech, Slovakian, Russian, Bulgarian, Turkish, Dutch, Estonian. Competitors can be successful either in mother tongue plus one foreign language or in at least two foreign languages without taking part in the mother tongue competition.